During my first degree in Biological Sciences at Westfield College, University of London, I combined my innate love of aquatic ecology with parasitology. My Ph.D. research at Queen Mary College, University of London, focused on the ecological adaptations of monogenean parasites, and thereafter I couldn’t shake off the parasite bug! I moved to Cardiff in 1999 to work on a range of projects concerned with host-parasite interactions, particularly interested in the factors that drive parasite transmission. I have held Leverhulme, University and Natural Environment Research Council Advanced Fellowships, followed by Reader (2008) and Chair (2014) positions at Cardiff University.

I have diverse research interests in the ecological adaptations of host-parasite systems. Specifically:

Our field and lab studies are aimed to understand the selection pressures imposed by parasites on their hosts. Such information can be used to design more appropriate control measures and ameliorate the impact of parasites on endangered species.

I work on several host-parasite systems combining experimental approaches with microscopy and molecular biology. Much of my current research is focused on the biology of Gyrodactylus species. These ectoparasitic monogenean worms are ubiquitous on teleost fish. Over 400 species have been described, but it is estimated that this number may exceed 20,000. With intensifying aquacultural practices, the unique colonization abilities and pathogenicity of gyrodactylids has resulted in major disease epidemics. One species alone, Gyrodactylus salaris, cost the Norwegian Salmon Industry >500 million € in the first 25 years since its introduction from the Baltic. Much of our work in Cardiff is based on model systems (G. turnbulli infecting guppies and G. gasterostei infecting sticklebacks) but, through collaboration with Norwegian colleagues, comparative studies are being performed on the economically-important G. salaris which infects salmonids.

Gyrodactylus species have an unusual mode of reproduction more akin to that of microparasites (such as viruses, bacteria and protozoans) rather than typical helminth macroparasites. Adult worms contain several generations of embryos boxed one inside another and are often referred to as “Russian Dolls”. Each parasite gives birth to a fully grown worm which attaches to the host alongside its parent and this can lead to exponential population growth. The reproductive biology of Gyrodactylus is further complicated as different modes of reproduction (asexual, parthenogenesis and sexual) may be involved in the life cycle of an individual worm.

In Figure 1, a-h represent the different stages of a newborn parasite. When this parasite (shown in red) is born it already contains a developing F1 embryo (green) in utero and as the parasite matures an F2 embryo (purple) is visible developing within the F1. After birth of the 1 st born daughter (green), an oocyte (yellow) enters the uterus and development of the 2 nd born daughter begins. The 1st born daughter can only develop asexually as development begins before birth of its mother, but 2 nd and subsequent daughters may develop parthenogenetically or sexually.

Fig.1. Different developmental stages of a newborn Gyrodactylus sp. (a-h) and its offspring.

We have used light and electron microscopy to examine gyrodactylid reproduction, particularly the adaptations for viviparity. After birth, a large oocyte moves from the Egg Cell Forming Region (ECFR) into the uterus via the posterior cap cell region (Fig. 2). Embryology is unusual, characterised by duet, rather than quartet, cleavage and extreme regulative development (“blastomere-anarchy”). Unlike most monogeneans, which release encapsulated embryos nourished by vitelline cells, Gyrodactylus embryos are nourished in utero. The embryo is separated from the parental gastrodermis by a metabolically-active uterus lining, which appears to form a “placental-type” role. The F2 embryo (not shown in Fig. 2) derives its nutrients directly from the F1 embryo.

Fig. 2. Structures involved in Gyrodactylus reproduction. F1 embryo in the central uterus flanked by anterior (acc) and posterior cap cells (pcc) in close proximity to the parental uterus (Ul) and gastrodermis (ga). The ECFR serves as both ovary and sperm storage chamber.

We are also investigating the role of sex in gyrodactylid strain evolution, and the potential of these organisms for genetic change using a battery of molecular techniques. Recently, we have provided the first conclusive evidence that sexual reproduction does occur in Gyrodactylus, and that under laboratory conditions cross-fertilization of worms is common.

The effects of host population structure on parasite diversity

The guppy, Poecilia reticulata, is a classic model for studies on microevolution, and yet the impact of parasitism on this host in the wild remains relatively unexplored. We are conducting the first field studies in Trinidad and Tobago to examine parasite diversity and assess their potential impact on poeciliid sexual- and shoaling behaviour. We are screening guppies and their associated parasites with species-specific microsatellite loci to assess genetic diversity at different geographical and population levels (between rivers, within rivers and within shoals). Uniquely, this study will assess the relative importance of parasites, particularly gyrodactylids, in relation to other natural- and sexual selection pressures on the host. In a parallel study, we are assessing the impact of parasites on speciation of Lake Malawi cichlids. 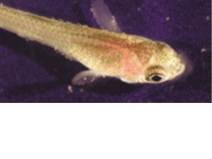 The guppy and its common gyrodactylid parasites, Gyrodactylus turnbulli and G. bullatarudis, are ideal species with which to test the influence of fish behaviour on parasite transmission. Female guppies not only school more than males but also show a greater preference for associating with their familiar schoolmates. Males, on the other hand, seem to move between schools in search of mating opportunities (Griffiths & Magurran 1998). The higher schooling tendency of female compared to male guppies has until now been explained by the higher cost of reproduction and thus increased investment in anti-predator behaviour for females. However, school fidelity may also be a defence against parasite infection as individual risk of infection is reduced by joining a school. We are currently testing whether female guppies experience low parasite load compared to males, and if males, by their increased mobility, contribute disproportionately to parasite transmission. We also plan to examine sex-differences in the cost of parasite infection. Testing such predictions will have important evolutionary consequences. Furthermore, comparative studies with Norwegian colleagues on G. salaris infected salmonids are revealing unpredicted transmission strategies that could have significant management and conservation implications for disease control. In collaboration with computer scientists, we are developing software to model gyrodactylid infra- and metapopulations.

It has been clearly documented that teleosts respond against monogenean infections, including gyrodactylids, but the mechanisms involved are unclear. In other vertebrates, the Major Histocompatibility Complex (MHC) plays a crucial role in the immune defence against parasites, and such a determinant of host specificity is an important character in the taxonomy of infectious organisms. Low variation of MHC in both captive and natural populations has been associated with increased disease susceptibility. MHC dependent mate-choice and kin-recognition suggests that MHC genes may also be important in sexual selection. The adaptive significance and polymorphism of MHC warrants further study into the use of MHC genes in conservation genetics, ecology and evolution. We are using the guppy as a model organism to test the effects of MHC genotype and haplotype on the fitness of individuals, including disease resistance. Parasite establishment, survival and fecundity on wild and captive guppy populations exposed to parasites are being examined in relation to MHC genotype.

Click here to see all publications, Link to ScopusTM Database